At the end of 2014, as part of the OPTI-MA measures, the Youth Parliament of the Republic and Canton of Jura was abolished. This was a symbolically strong event for the youth of the Jura, representing an attack on the freedom of speech and the involvement of young people at the cantonal level. This even though more and more cantons in Switzerland are adopting a Youth Parliament. This abolition was all the more damaging in that a reform had been envisaged and several ideas for making the parliament more dynamic had been put forward.

Two former members of the former Youth Parliament, Ludovic Morel and Jessica Wiser, have formed a Facebook page to mobilise young people and make their voices heard. This page, entitled "So that young people in the Jura can keep a parliament", has had more than 200 "j'aime" in the space of a week.

With the help of the Inter-Jurassic Youth Delegate, a group of young people was formed with the aim of creating a new Youth Parliament in the form of a private association.

It was decided not to revert to the form of the Youth Parliament as it existed before. The aim was, above all, to make a Parliament that corresponded to the desires and needs of young people. This was the major problem with the former Youth Parliament.

The working group consisted of a "core group" of four people. Other young people participated to a lesser extent or showed enthusiasm for the project. 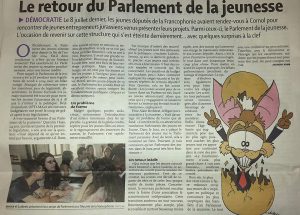 For almost 6 months, the working group held a series of working sessions to consolidate the foundations that had been laid. The AdJJ was created as a private ad-hoc non-profit association on 23 May 2015.

Subsequently, the founding members of the AdJC worked for a year in order to recruit new members, but also to develop the functioning of the Assemblies.

On 12 March 2016, the Constituent Assembly brought together 20 members in Bassecourt. The members elected the first bureau, ratified the statutes and internal regulations and participated in the first debate.

The AdJJ was born and was quickly recognized as being of public utility.

In favour of:
ASSEMBLY OF YOUNG JURASSIANS

This website uses cookies to improve your experience while you navigate through the website. Out of these, the cookies that are categorized as necessary are stored on your browser as they are essential for the working of basic functionalities of the website. We also use third-party cookies that help us analyze and understand how you use this website. These cookies will be stored in your browser only with your consent. You also have the option to opt-out of these cookies. But opting out of some of these cookies may affect your browsing experience.
Necessary Toujours activé
Necessary cookies are absolutely essential for the website to function properly. This category only includes cookies that ensures basic functionalities and security features of the website. These cookies do not store any personal information.
Non-necessary
Any cookies that may not be particularly necessary for the website to function and is used specifically to collect user personal data via analytics, ads, other embedded contents are termed as non-necessary cookies. It is mandatory to procure user consent prior to running these cookies on your website.
Enregistrer & appliquer